Probably, this is what a dark version of ‘The Breakfast Club’ looks like.

Summary: 5 kids walk into detention, only 4 of them come out.
The 5th student is dead.

However, the dead guy is outcast hated by most, for posting their embarrassing secrets on his app. So, who amongst them killed him? 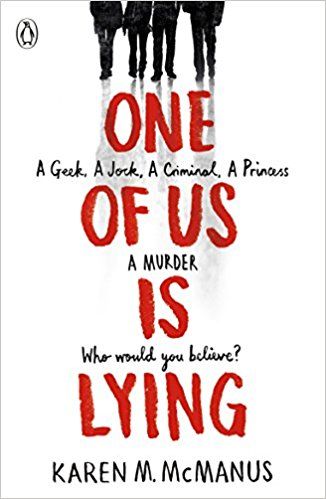 One of us is Lying is an absolute pageturner. It kept me hooked on to it until the very end. Although the accused have a pretty solid alibi, I was doubting everyone. EVERYONE.

I loved how the author sheds light on subjects like mental illness, bullying, the pressure of social media and the negative media intervention. Whilst, making it a captivating read.

With that being said, I also found a few unclarified hangers in the story:
1. The author should’ve described how the phones got into their bags in the very first place.
2. Also, how did dead guy know all the deepest secrets about his peers to start with?
Considering, the plot progresses on these two points, an explanation is worth a shot.

P.S. This would make a pretty kickass TV show.